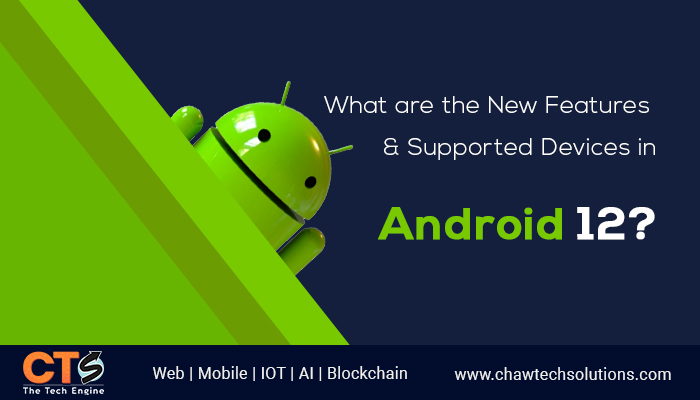 What are the New Features & Supported Devices in Android 12?

With over three billion devices tied to it, Android is the most popular smartphone operating system globally. Even the smallest modifications to the operating system have the potential to affect millions. This time, it is the tech giant’s most significant effort in recent years, with a slew of new capabilities and a major design overhaul in Android 12. Read along to know more about Android 12’s latest features and more.

Here’s All You Need to Know About the New Android 12:

The new revamped Android 12 is a piece of delight that offers the following new featured:

The big news is its new design Material You, which combines many aspects into a single, cohesive design language that operates across the OS. More rounded buttons, more varied colors, smoother motion and animations, and much more are included in the current beta.

It is a feature that allows you to choose a wallpaper and have the system apply the dominant, complementing, and best-looking colors from it to the rest of the UI, such as the notification shade, lock screen, and volume controls.

In comparison to earlier Android versions, Android 12 places a greater emphasis on widgets with redesigned to make scrolling and viewing easier. The appearance will reflect the color palette you’ve chosen. A few new APIs for widgets have been added to boost efficiency, work with Material You theming, and even introduce new widgets in Android 12.

Google has made it a point to put privacy at the forefront of Android 12. The Android Private Compute Core is the brains behind Android 12’s privacy features, ensuring that apps and the phone respect your privacy settings. The new privacy dashboard provides an overview of apps that use the phone’s location, camera, contacts, and other features. A good touch here is a quick overview of what has been visited by the apps over the last 24 hours in the form of a pie chart.

The revamp is heavily influenced by Samsung’s One UI, with huge headers that take up a lot of space. It makes the top settings on any given page simpler to grasp on taller phones. The addition of Safety & Emergency to the main Settings page is the only other notable update. It allows you to define things like an emergency contact and other details without having to dig deeper into the settings.

The major makeover here includes larger, rounded rectangle buttons in the smaller toggles. These new tiles function similarly to earlier toggles, allowing you to turn them on and off by tapping them. There are also new tiles for accessing the camera and microphone. Google Pay, notifications, and smart home features are all available. A handful of the tiles have diverse functions, like always displaying a prompt and storing mobile and Wi-Fi data.

Other smaller new features include app hibernation, face detection, improved screen rotation features, a new built-in remote, scrolling screenshots, one-handed mode, and slightly updated notifications. The power button will now bring up Google Assistant while held down, making it much easier to contact the service for a question when needed.